Hey guys, I went to Scotland! It was the best. My lovely friend Erin is living in Edinburgh for two years while her husband does a master’s at the University of Edinburgh. They’ve been down to London, but I needed to get myself up to Scotland. Luckily, our friend Heather decided to take a trip out this way, so we coordinated a big adventure. I’ve long had an appreciation for Scotland for basically no reason (aside from how much I like to listen to Peter Capaldi swear at people), and I’m so so happy I finally got up there.

I took a flight from JFK to Edinburgh, but it stopped at Heathrow first. The most noteworthy thing about this flight is that CHRISTOPHER ECCLESTON WAS ON MY PLANE. Christopher Eccleston! The Doctor! I may have accidentally brushed past him on my way off the plane, as he was sorting out a baby stroller. It was super exciting and momentarily distracted me from the fact that I was VERY CLOSE to missing my connection. First flight was delayed, and I straight up SPRINTED through a few Heathrow terminals and made it just as my second flight was boarding. (I have lots of thoughts about the ridiculousness of the layers of security I had to go through when changing terminals.) Virgin, however, underestimated my ability and determination to make my flight and took me off of it, so when I went to board, there was no record of me. Some overtired tears ensued, and they let me back on, but just to be fun, let my suitcase have a break at Heathrow. Spent a day in Edinburgh without it, have now learned some lessons about what you should really pack in your carry-on.

Anyway, Scotland! Heather and I got in around the same time, Erin met us at the airport, and we all took the bus a short way into town. We headed to Erin’s adorable flat, then out for a bit of food. After some tasty soup, sandwiches, and coffee at the Edinburgh Larder, we set out to explore. As we walked down Princes Street, we saw a very tall thing and decided we should climb it. The tall thing was the Scott Monument, and it gave us lots of pretty views of Edinburgh, which was a pretty great way to start off our visit, even if climbing up lots of narrow stairways while completely jet lagged was maybe a bit painful. 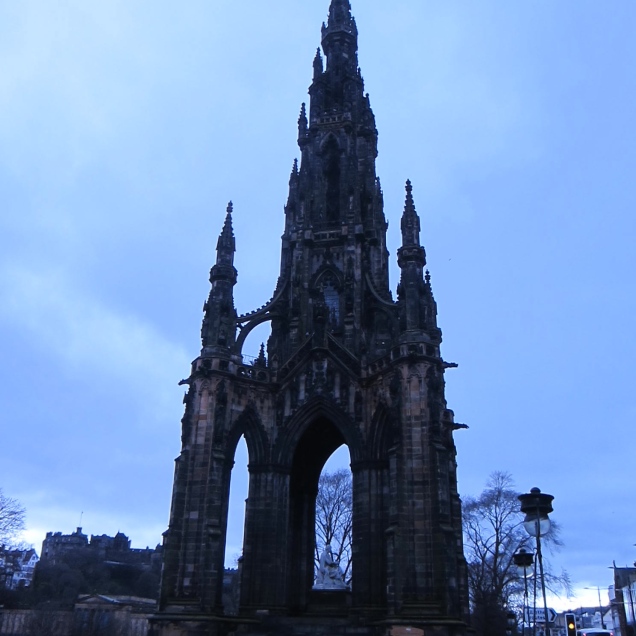 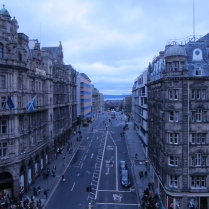 Looking out from the Monument 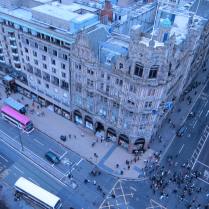 There’s a band down there…

From there, we walked over to Calton Hill, saw some more monuments, and got even more pretty views of Edinburgh. We’d only been in town a few hours, but Edinburgh was already showing off quite a bit. 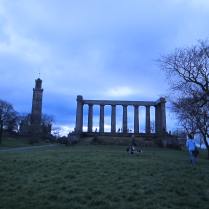 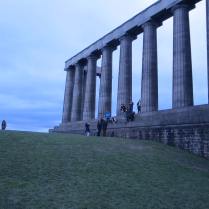 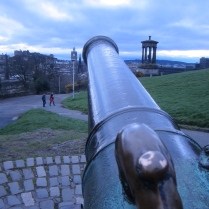 Erin made a reservation at a tasty pub/restaurant that serves HAGGIS BURGERS. We got one for the table to try, and…if I didn’t think about what I was eating, it was actually pretty good. SORRY SHEEP. After dinner we were pretty sleepy, so we headed home for the night.

The next morning, we had a quick breakfast at a coffee shop near Erin’s, then made our way to the Water of Leith walkway. Popped into a bookshop along the way. We wandered the walkway, which was incredibly pretty and quaint, and ended up at a little market in Stockbridge. Had a pie, sampled some chocolates, then wandered the area for a bit. 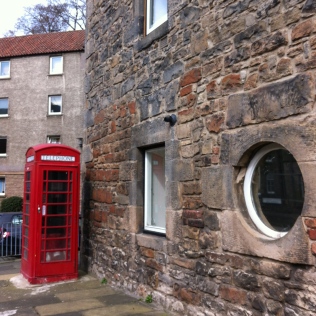 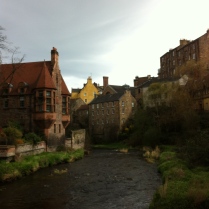 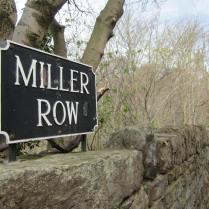 used to be lots of mills here 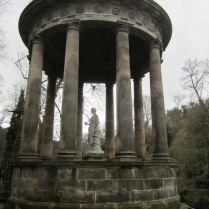 not sure what this is

Then we headed up the Royal Mile to the Castle, since we figured we should probably go see that. It was just ok. It was sort of expensive (I think £16?) WITHOUT any kind of guide. And there weren’t really enough signs with information, so we spent a lot of time just sort of wandering, looking at a really crappy map they gave us, trying to figure out what was worth looking at. I guess I’m glad we went, since it’s the big thing to do, but I don’t know that I’d really recommend it to others. Maybe if there was an audio guide thrown in, it’d be worthwhile. 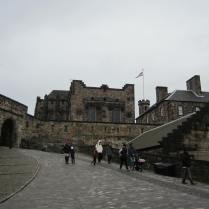 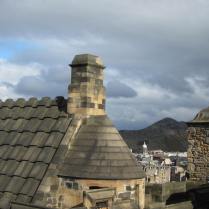 After the Castle, we did some eating and drinking in various places, but one is really really worth mentioning. There’s a little speakeasy place called Panda and Sons. It was a bit of a walk to get to, and I forgot we were going to a speakeasy, so when Erin brought us to what looked like a barber shop, I was confused. But then you go downstairs, pull a book handle on a DOOR OF BOOKS and then you’re in! We had some fancy cocktails, some served in ridiculous ways, and it was just a fun environment. Highly recommended. Maybe gimmicky, but I liked it. 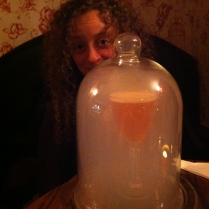 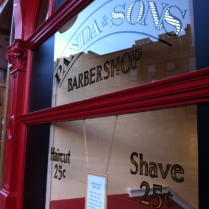 friends with Heather, too

On our last full day in Edinburgh, we learned all about whisky (turns out I like Highland whisky, a la Talisker), then took on Arthur’s Seat. Arthur’s Seat is a big old hill in Holyrood Park that was once a volcano (like a billion years ago). It’s probably not actually a very difficult climb, but whooooooo I am not used to climbing things! I walk all the time, sometimes go for runs, but I don’t generally climb slippery rocks. It was a bit scary, but I am happy to report I did not fall over even once. Erin and her husband brought their two great dogs, Rosie and Remy, up for a walk. They did not seem to notice things were slippery and high up. It was a bit terrifying to watch Erin and Bembe go down Arthur’s Seat, sort of chasing after the dogs, who just went wherever they thought best. But everyone survived! And it was absolutely beautiful. It was drizzling a bit on our way up, but by the time we’d finished our climb, we mostly just had great views. 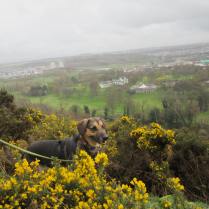 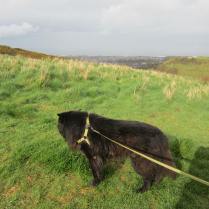 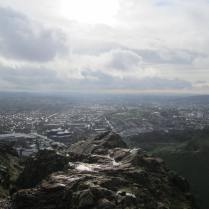 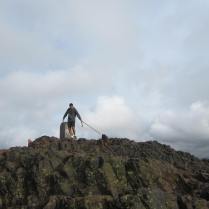 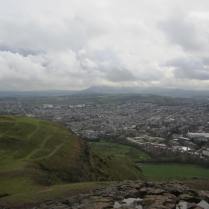 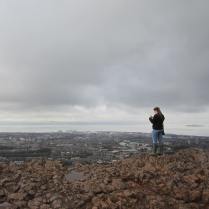 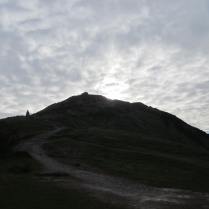 We took a different route back down and went into Duddingston, a little village next to Holyrood Park. We had some well-deserved food and beer at the Sheep Heid Inn, a very very old pub. I don’t think it was everyone’s favorite food-wise, but it was just such a nice little cozy place, perfect to end our hike. After eating, we headed back to the Royal Mile to go on a (very silly) ghost tour, but stopped to take many pictures along the way. 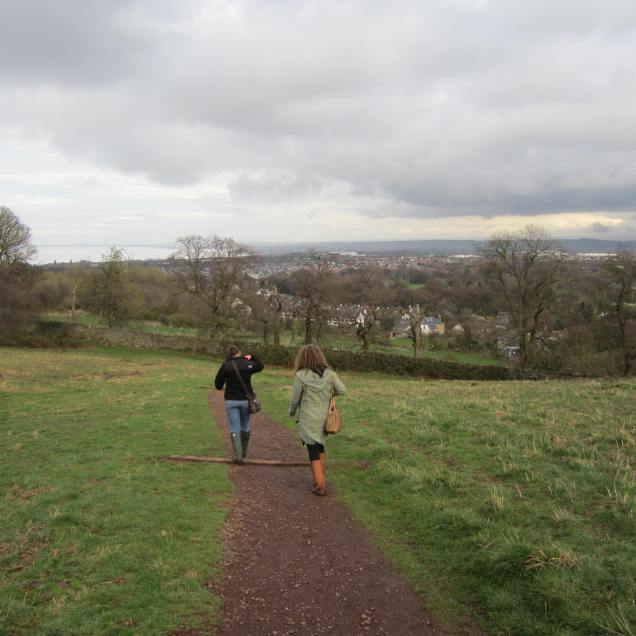 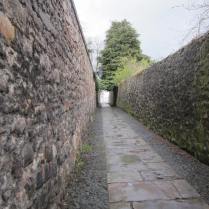 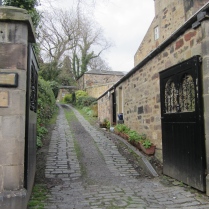 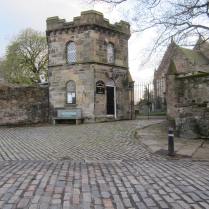 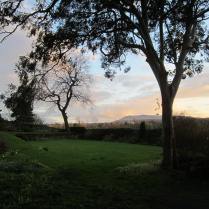 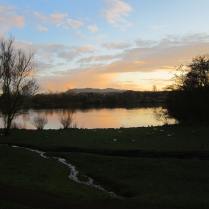 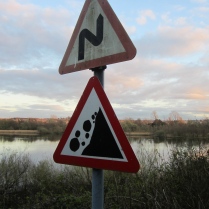 We had one last morning, Erin and Bembe headed out early for a flight to London to meet his parents. Heather and I took our time getting to the train station, picked up some breakfast, and had a nice train ride back to London. I think we were both very sad to leave Scotland–Edinburgh is a great city, a perfect combination of city things and nature things, and really just the right size. I’ll definitely be back, if only to continue perfecting my Scottish accent.