Recently, my friend Erin has been updating her blog. Which reminded me that, oh right, I’ve neglected mine for nearly 2 years now. I really did want to keep a record of my time abroad and actually write things down so I remember. I feel bad that I have been so terrible at this.

There’s a podcast I’ve been listening to a lot, called Reply All. It’s a podcast about the internet–things you find on it, things that happen because of it, etc. Last year, they started a holiday, Email Debt Forgiveness Day. It is a day to send emails you’ve been meaning to send, reply to emails that have been sitting in your inbox for an embarrassingly long time. I don’t have any emails I need to respond to (I…think? If I owe you one, let me know), but I want to expand Email Debt Forgiveness Day. I already think it should apply to texts, Facebook messages, and the like. So I’m furthering it to apply to this blog. I have been meaning to update, but it’s always been too long and I feel stupid about it. I have to dig up things from nearly 2 years ago to write about. But it’ll just keep getting farther and farther away, right? So here we are.

Let’s see…when we last spoke, I was in Scotland, talking about Barcelona. So let’s talk a little bit about Scotland for the moment.

As part of my Master’s course, everyone was assigned a summer work placement. During the course we had weekly ones, where we’d go in to a museum/library/etc. once a week and work for a few hours, but these summer placements were meant to teach us more because we would go every day for a few weeks, like real working people. A lot of the placements tended to be outside of London, and I knew a girl the year before had gone to Scotland. Seeing it as a chance to explore more of the country while still doing the work I went abroad to do, I asked to be sent as far from London as possible. And that’s how I ended up spending part of my summer in Aberdeen.

Here is a very dumb map I found of the distance between London and Aberdeen because I do not know how to make such things myself. As you can see, it is pretty far! It is a 7 hour train ride. Or a pretty short flight. I decided that instead of heading straight to Aberdeen, I would stop in Edinburgh, to break up my train journey, and to visit Erin (you may remember my previous trip to see her).

I loved Edinburgh the first time I went, and that feeling held strong the second time, but we chose to explore somewhere else while I was visiting. I did spend one evening with Erin in the city, though. At that time, we were well into the World Cup, so we decided to go somewhere to watch the USA-Germany game. There’s a big old pub called the Three Sisters that has a large courtyard where in nice weather they set up tables and have food and such. We went there and managed to find a spot to sit to watch the game. It was festive.

America lost, so we went to get dinner which, for me, consisted of a HAGGIS BURRITO. It was surprisingly delicious.

The next day, we ventured out of Edinburgh. We were deciding between Stirling and St. Andrews, and I think swayed by reading about an ice cream shop, we hopped a bus to St. Andrews.

As I’m pretty sure the only thing we had on the day’s agenda was eating ice cream, we mostly just wandered around. We visited the Cathedral (well, the grounds, since there’s not much left of the Cathedral), the Castle, and the University. We traipsed around the Old Course and walked along the chilly beach. If you want actual information about any of these sites, I encourage you to visit Erin’s blog for her entry about all of it, as she is a much better historian and clearly has a much better memory. She has an especially good explanation of the Castle and the really cool mine/counter-mine that we crawled through. Also her pictures are better. Basically, Erin is a lot better at everything to do with this particular trip. I’ll try harder for the next entry. This is just my re-introduction. Here are some pictures. 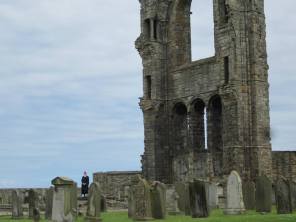 View of Cathedral from the Castle 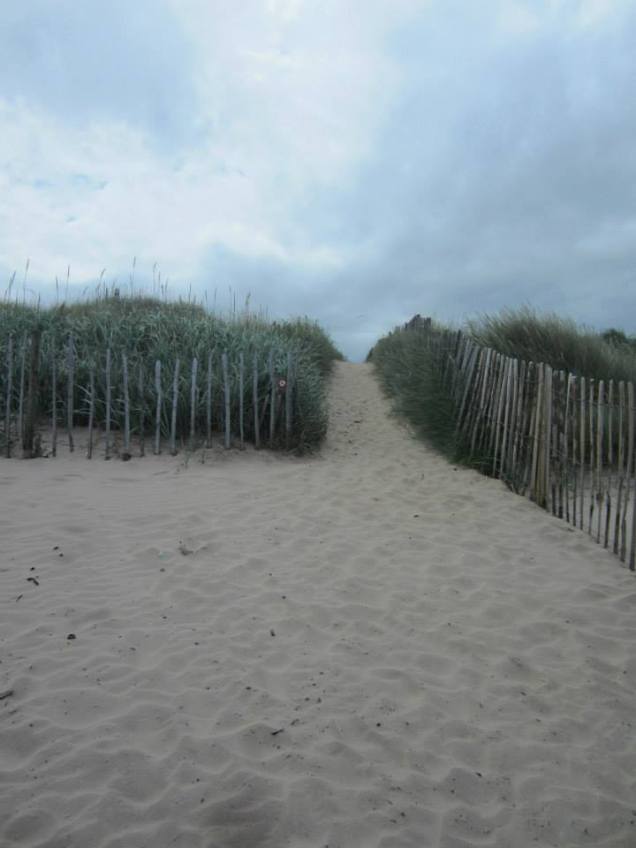